One Year Ago in Minneapolis

One year ago today, George Floyd was arrested for passing a bad 20 dollar bill at a convenience store on Minneapolis’ southside. His death in custody was a link in a chain of events that lead back to the moment we were all living in May 2020.

We were living in COVID lockdown. All bars and restaurants were closed or doing take-out only. All clubs had been shuttered, including the one that employed Floyd as a bouncer.
On May 25, 2020, George Floyd was a man on the edge. He was an addict struggling with his recovery with a criminal record. He had come to Minnesota to make a fresh start, and the government’s response to COVID had knocked him down.

That is what government can do when it has that kind of power. To save some people, it destroyed countless others. It created pandemic millionaires while it snuffed out the life savings of small businesses, entrepreneurs, and families.

People on the left think that new laws and programs can right wrongs, but the government will get it wrong again. There is no “justice” for George Floyd, even if the police responsible for his death go to jail. His family will get $27 Million from the taxpayers of Minneapolis. Looters got their flat-screen TVs and other booty. Non-profits are raking in millions from big corporations who have bought into woke culture. None of those things are justice.

The underlying causes for what happened to George Floyd are not being addressed in two important ways. One is our loss of freedom due to the government’s response to the pandemic. The other is the failure to address police reform in a way that enhances the security of all law-abiding citizens and does not undermine it.

Representative Tim Miller spoke alongside the House members of the public safety conference committee. Over the next few weeks, this committee will be working to reconcile the differences between the House and Senate omnibus public safety bills.

A Letter to Law Enforcement

Representatives Bahr, Drazkowski, Miller and Munson as well as Senator Scott Jensen sent letters to the President of the MN Sheriff's Association and the Executive Director of the MN Police and Peace Officers Association asking them to enforce laws according to the Constitution and their oath of office. The letters draw attention to Walz's constitutionally questionable Executive Orders. This was sent following a letter sent by Commissioner John Harrington that demanded Minnesota Law Enforcement Officers enforce the Governor's Executive Orders.

Yesterday the Public Safety Committee had a hearing for Cassie’s Law. This bill aims to help people who have suffered from a traumatic brain injury (TBI), limiting their judgement.

Representative Munson is the chief author on the bill, and he has worked closely with Tim Barry, the father of Cassondra Barry, to develop this bill. Cassondra suffered from a stroke that left her with no use of her frontal lobe and she has been in and out of prison ever since.

This bill directs judges to order a neuropsychological evaluation prior to sentencing when a defendant has a prior history of a TBI. If the evaluation reveals a lack of impulse control due to a TBI, then sentences could be adjusted to seek effective treatment. 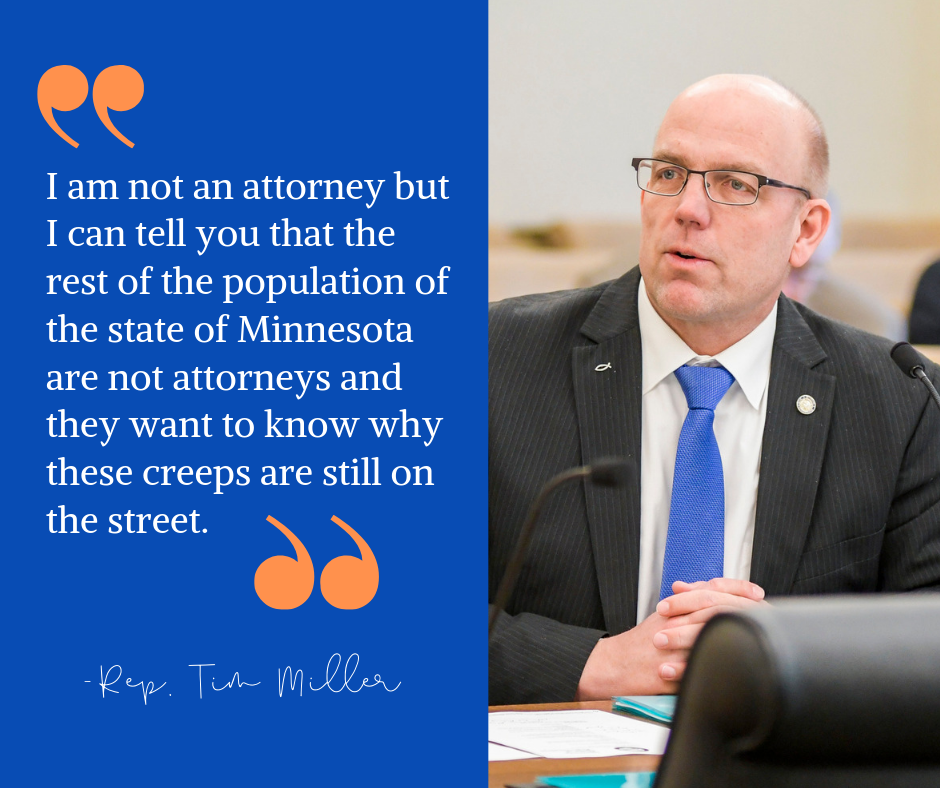 Rep. Tim Miller sits on the public safety and corrections committee and he has followed the issue of sentencing guidelines for cases involving sexual assault, particularly of minors, for a long time.  He has a personal story to tell when he explains why he has chosen to focus on this difficult topic.  He told it in committee this year when a bill on sentencing reforms was heard.

The taskforce law passed last session and this week Rep. Miller and other legislators spoke to the task force this week as it began to work.  You can read the press release here.