On Tuesday, April 13th, Rep. Drazkowski and four other house members, (Reps. Bahr, Munson, Miller, and Lucero) introduced a resolution to end the peacetime emergency and asked for a vote to bring it to the floor.

In order to get a roll call vote, the motion needed 15 hands.  Typically, each caucus is large enough to provide 15 hands for the roll call, but the New House Republican caucus has 4 members and must rely on members of the other caucuses to provide them 11 more votes for a roll call. In this case, the other caucuses did not.  Nevertheless, due to the circumstances of the social distancing, with members voting by phone, when Rep. Drazkowski asked for a division, the Speaker was faced with the need to have the members announce their votes as if in a roll call. But a division is not recorded in the journal.  In a division during normal times, members stand to be counted.  Due to the unique circumstances, members each had to voice their vote on the phone and in the chamber.  So although the vote is not in the journal, it does exist, on the recording of the session.  Interestingly, although the motion to bring up the resolution did not get 15 hands for a roll call. It did get exactly 15 hands on the motion itself after division was called. Here is our tally of the division vote, as seen on video. You won't find this in the House Journal because the motion did not get 15 hands for a roll call vote. 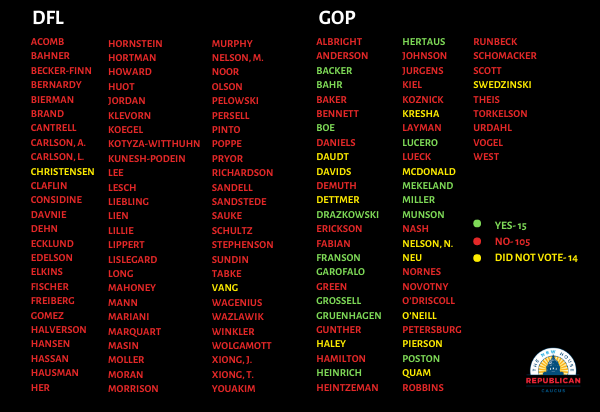 The Republican Caucus had their “end the peacetime emergency” resolution.  After easily getting 15 hands for a roll call vote for a motion to suspend the rules, they voted on their motion and got a roll call vote.